In Italian, bad words or cursing is called “parolacce”. Now let’s see one second where this Italian word come from. In Italian the translation of the English term “word” is “parola”. So “parola”means “word”. All clear until there, but so how did it became “parolaccia” instead? First of all a little of basic grammar about the gender and number of nouns. In Italian, the majority of nouns work this way: they are masculine when they end with the letter “-O” and they are feminine when they end with the letter “-A”. Pretty clear right? Remember, not all Italian nouns follow this pattern, in fact some end up with the letter “-E” both at the feminine and at the masculine, but let’s forget about that small number of nouns that are no more than 20% for now. Let’s consider just the largest part of nouns, and they do end in “-O” when they are masculine and in “-A” when they are feminine. This happens also with the name s of people. Do you know that Italian is the language of the vowels right? And that all the Italian words end with a vowel? The few words used in Italian that do not end up with a vowel are foreign words from English, French and Spanish that entered in the language. Those words have also irregular plural. Some words that do not end up with vowel are straight from Latin, the mother of the Italian Language. Like for example the word “gratis”. This word is commonly used in Italian is Latin and means “for free”, like something you don’t have to pay for. “Gratis” is a Latin declination of the Latin word “gratia” that means “favor” or “concession”. This word evolved from Latin and become “grazia” in modern Italian. However all that just to tell you that, with exclusion of a few words, the large majority of Italian words end with a vowel. I was saying that most words end with an “-O”” when are masculine and with an “-A” when are feminine. Is interesting to notice that that happens also with the names of people. Take most Italian proper names and you will see. For example the Italian name Marco is masculine, same with Paolo, Francesco, Stefano, Alessandro, Mario, Massimo and so on. Let’s see with women names like my own for example: Laura! Feminine! Or others like Stella, Samanta, Federica, Simona, Elena and so on. See? O masculine and A feminine!  All those masculine Italian words ending in -O, at the plural will end in -I, while the feminine words ending in -A, at the plural end in -E.

The word “parola” that means “word” is feminine singular, in fact you can check that it ends in -A. So now let’s see how it become instead something like “parolaccia”. Actually “parolacce” that you see in the title is the plural form of this feminine word and it literally means “bad words”.

Latin is a language that works differently than any other modern language. In fact in Latin there are not active prepositions, meaning that Latin prepositions exist but they are only indicative of the declination that follows. In Any modern language, the prepositions are posted before nouns to indicate a kind of relationship between this noun and other elements in the sentence. So basically Ancient Romans indicated the relationship “the dog of the boy” not by using the preposition “of” but by the ending of the word “boy”. In short Latins instead of posting prepositions in front of nouns changes the ending of the word. In Italy we have some Grammatical and Syntactical construction that still work this way. For example by changing the ending of nouns or adjectives, in Italian, you can enhance or modify their meaning. For example if you add the ending “-issimo” to adjectives you enhance its meaning. “Bello” is an adjective that means “beautiful” but if you add the ending and you make it “bellissimo”, now it means “extremely beautiful”, “amazingly beautiful”. This particular grammatical form is called “superlativo assoluto” or “absolute Superlative”. The term “superlative” shows the enhancement made on its meaning and the term “absolute” means that is not compared with something else, it is “amazingly beautiful”  in an absolute way. In contrast there are the “Superlative relative” constructions made with the adjective, when there are some form of comparison. Like for example “la mia macchina é la piú bella”, (my car is the most beautiful), in this case is implied that my car is the most beautiful compared with other cars, in fact that sentence implied that my car is the most beautiful among other cars.

The absolute Superlative construction applies the concept of enhancing the meaning of adjective by changing its ending. This end-changing of a word to change its meaning is a construction coming from Latin. 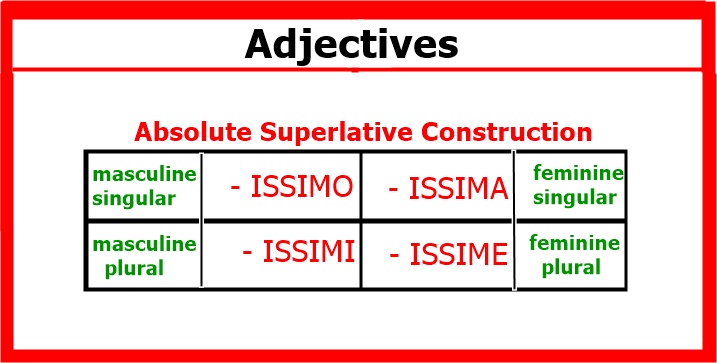 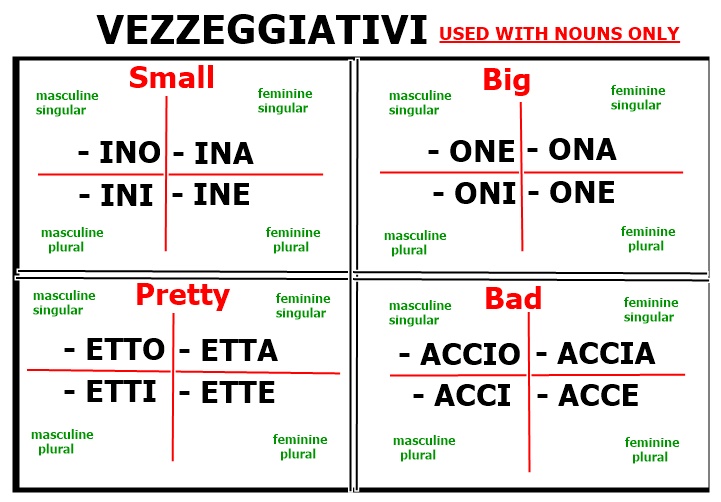 There are 4 grammatical models that change the meaning of nouns without having to use an adjective to do so, like is done in English (because this structure does not exist in English). So let’s take the word “gatto”, that means “cat”. If we want to use the first of the first construction we will use the masculine, singular ending since “gatto” is masculine, singular (see previous chart – because is ending in -O). So let’s cut off the last letter from the word “gatto” and we get the stem of the word that is gatt- and to that we add -ino. The result is “gattino” that means “small cat” without to have to use the adjective “small”. In English you have a specific name for “small cat” that is “kitten”; in Italian we use this structure to construct words that have incorporated in itself the adjective “small”, “big”, “bad” and “pretty”.  Now if we want to say “bad cats”, we have to make the word “gatto” at the plural that would be “gatti”; then we need to use the vezzeggiativo that means “bad” and take the one masculine, plural that is -acci. The result is “gattacci” that is the perfect translation for “bad cat”.  In Italian this construction is used a lot, but many nouns are not regular and don’t follow that patterns but they have their own.  Let’s see some example and try to see if you can build them yourself! 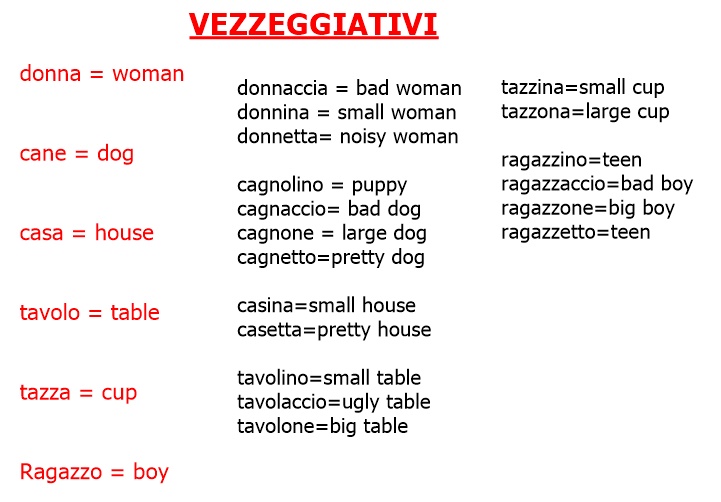 So you can see some exceptions here, for example “donnetta” does not mean pretty woman, is actually mean noisy, silly with the meaning of “small person”, and is a negative meaning. The world dog then is totally irregular, that is because if the word “cane” would have been used literally with this construction, it would have generated the word “canino” that means “canine” the tooth. So in order to avoid confusion the use of the construction with dog is “cagnolino” and not “canino”. The ending -accio means bad or ugly so in the case or “parola”, we can easily see that “parolaccia” means bad word. The meaning is specifically of cursing. “Parolacce” is the plural of the term. Voilá!

Now I am sure you want some Parolaccia? Here you go. 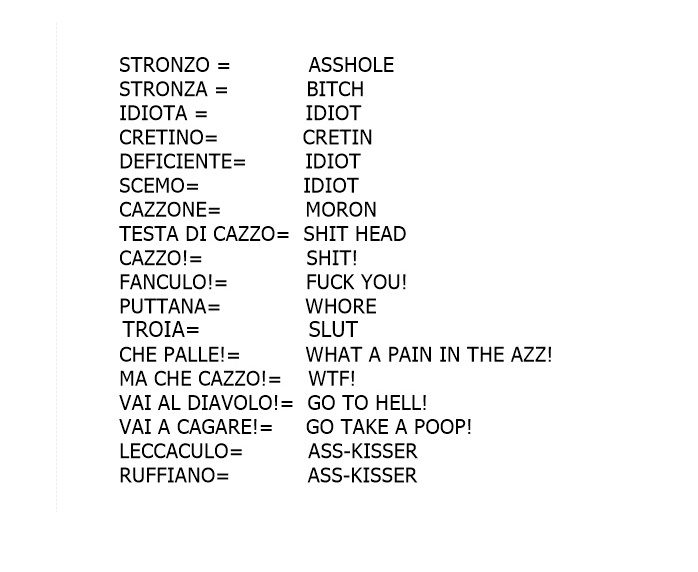